The name infrared comes from the Latin word infra, meaning “below”. Red is the color of the longest wavelengths of visible light. Infrared light has a longer wavelength than that of red light. A longer wavelength means it has a lower frequency than red, hence “below”.

Sir William Herschel, an amateur astronomer famous for the discovery of Uranus in 1781, discovered infrared in the early 19th century. Herschel was familiar with Newton’s discovery that sunlight could be separated into its separate chromatic components via refraction through a glass prism. Herschel hypothesized that the colors themselves might contain different levels of heat, so he devised an experiment to test his theory. Herschel passed sunlight through a glass prism to create a spectrum (the rainbow created when light is divided into its color components) and measured the temperatures of the different colors. He used three thermometers with blackened bulbs and placed one bulb in each color while the other two were placed outside the spectrum as controls.

Infrared is a section, or “band” of invisible light found on the electromagnetic spectrum. It’s a form of radiant heat that can also be called “infrared energy.” About 80% of the sun’s rays actually fall in this part of the spectrum. Far infrared, the energy produced in BioSmart™ Heaters, is the form of this energy that occupies the region where wave frequencies measure between 5.5 and 15 microns. See the graph below: 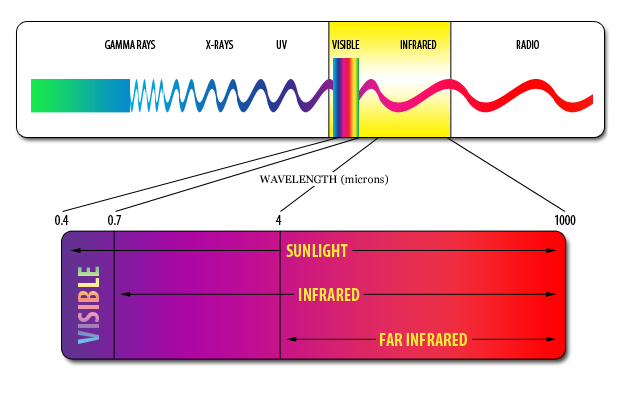 The electromagnetic spectrum is the entire range of radiant energies, measured as waves or frequencies. It is divided into three segments by wavelength measured in microns. A wavelength of 0.076 to 1.5 microns is “near” infrared, 1.5 to 5.6 microns is “middle” infrared, and 5.6 to 1000 microns is “far” infrared (FIR). This invisible band of light warms objects without warming the surrounding air. The best example of this is the sun. Consider standing in the sun on a cold day. You feel warmth from the sun even though the air temperature is cold. This warmth you feel is far infrared penetrating your body to a depth of 1.5 to 3.5 inches. Infrared heat is, therefore, a completely safe energy that raises the temperature in objects without having to heat the surrounding air. Approximately 80% of the sun’s rays fall into the infrared range. (This should not be confused with ultraviolet rays, which are harmful to the skin.)

Infrared energy is not visible to the human eye but can been seen with special cameras that translate the light into visible colors. Our bodies radiate far infrared energy through the skin at between 3 and 50 microns. Our palms emit infrared energy between 8 and 14 microns. (You can experience this by holding your palms near each other without touching.) Palm healing, with a 3000-year history in China, is based on the natural healing properties of far infrared energy.

Although heat therapy has been in use for mental, physical and spiritual well being for hundreds of years, technology has only relatively recently allowed the direct use of infrared as a source of energy for heating the body. This application of infrared began in the early to mid 20th century in Germany, and has been actively developed by Japanese doctors and therapists for the last 40 years. Since the early 1980’s, infrared therapy has been further refined and sold in the United States and many European countries.

The health benefits of the infrared heater have been widely documented, and will continue to be in the future as its use and popularity increase. Regardless of the debate over the specific advantages of infrared heaters, there can be no doubt that they do deliver many health and cost savings benefits. In recognition of this, BioSmart Technologies is proud to offer far infrared heaters with the most effective far infrared heating characteristics that the market has to offer.